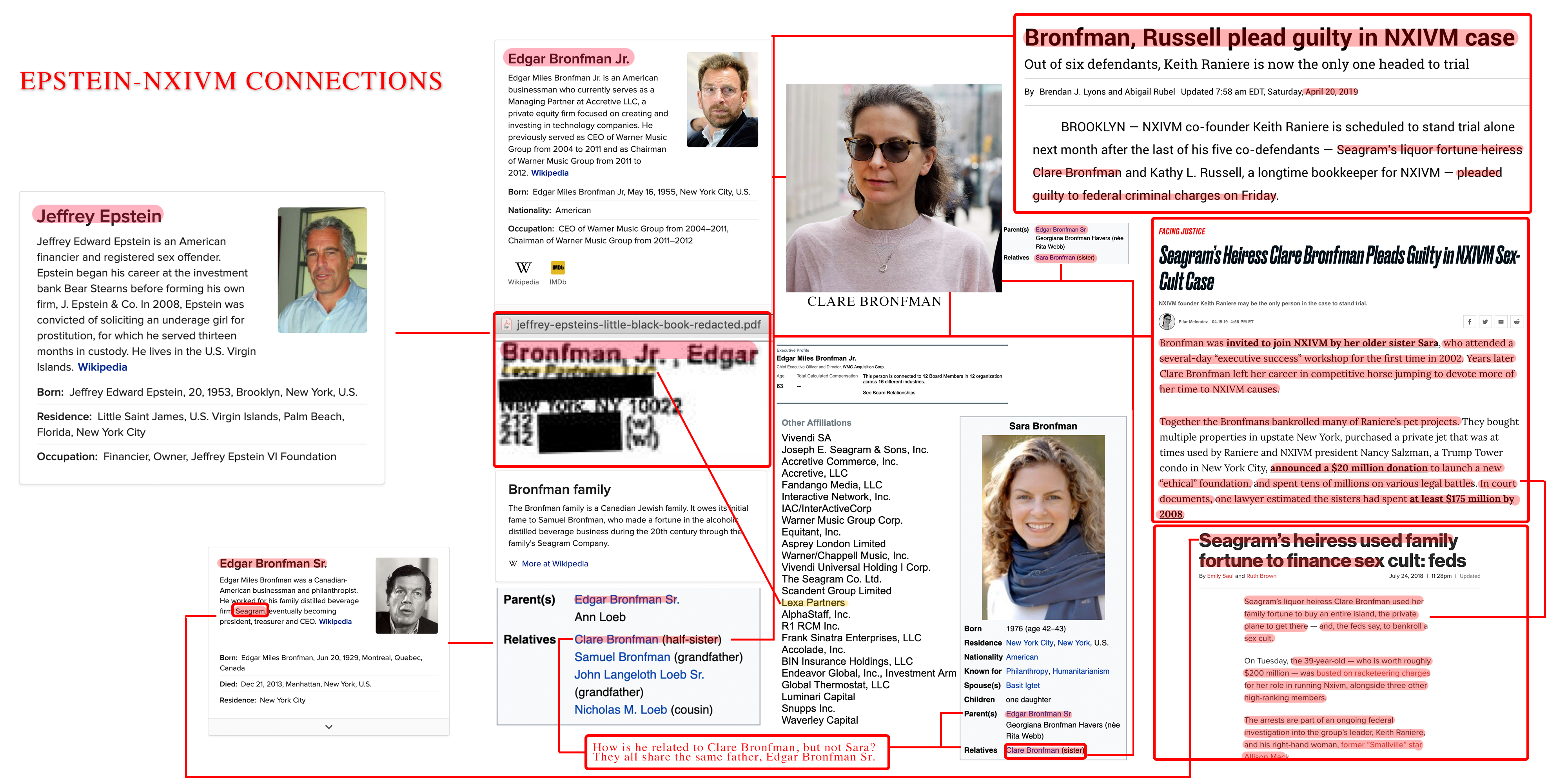 purported pyramid-scheme operator who was run out of Arkansas when Bill Clinton was governor has reinvented himself as the head of an upstate group accused of being a “cult” – and his devotees have pumped thousands into Hillary Rodham Clinton‘s presidential run.

Executives and top associates of the Albany-based NXIVM group – along with their family members – donated $29,900 to Clinton’s presidential campaign, according to federal records.

On March 14 and April 13, records show, more than a dozen contributions poured into Clinton’s coffers from NXIVM, an executive and group-awareness training organization led by Brooklyn-born Keith Raniere, 47.”

“Clare W. Bronfman, an heiress of the Seagram Company business empire, allegedly implanted a “key logger” virus on the computer of her late father, Edgar M. Bronfman Sr., so officials with the NXIVM corporation could secretly monitor his emails, including his exchanges with world leaders and Democratic presidential candidate Hillary Clinton, according to court records.”

Extra details on this predator’s crimes:

Note: the connection to the Rothchilds family seems to be oblique – Partners Of The Rothschild Family Implicated In Elitist NXIVM Sex Cult

” . . . The Bronfman family has also been in business with the Rothschild family for quite some time. One of many examples is their wealth management company, Bronfman Rothschild, which began in 1997 as Virchow Krause Wealth Management.”

” . . . In the matter of Microsoft Corporation versus Global Technologies, administrative patent judges Kalyan K. Deshpande, David C. McKone, and John A. Hudalla, made the Judgment and Final Written Decision: Mr. Raniere does not own the patent for teleconferencing.“
– the article goes on to detail the brazen lies Raniere told in court about “his” technology.
” . . . the patents he cited were registered with the U.S. Patent Office as being owned Global Technologies Inc., a State of Washington corporation that was incorporated in 1995 and dissolved in 1996.
The corporation did not list Mr. Raniere as one of the owners.”

This last article is important.  It shows Raniere as a habitual liar, a big ego-maniac and a technology thief.   In the above articles we see how his inner circle (Clare Bronfman etc.) exploited their technology skills/contacts to steal information, hack people’s servers, including Hillary Clinton’s sieve in her basement, and commit  many other  tech-crimes.  He seems to be close to IT companies just to further his nutty, predatory agenda.

♦ NXIVM ties to Clinton Global Initiative coming out in court

“Seagrams heiress Clare Bronfman faints in court after judge seems to suggest that Michael Avenatti was secretly representing her, trying to negotiate deal with US attorney’s office in NXIVM case.”    lots more . . .

AP TRIES TO COVER UP CLINTON LINKS TO SEX CULT

On Genie Energy – Cheney, Rothschild, and Fox News’ Murdoch Begin Drilling for Oil in Syria — a Violation of Int’l Law

Ties between CF and NXIVM

One of Bill Clinton’s friends and mega donor to the Clinton Foundation, Keith Raniere, has been arrested on child sex trafficking charges.

AP Tries To Cover Up Clinton Links To Sex Cult

On the donations to the Hillary Clinton campaign by NXIVM

The Albany Times-Union / October 19, 2015
By Brendan J. Lyons
Clare W. Bronfman, an heiress of the Seagram Company business empire, allegedly implanted a “key logger” virus on the computer of her late father, Edgar M. Bronfman Sr., so officials with the NXIVM corporation could secretly monitor his emails, including his exchanges with world leaders and Democratic presidential candidate Hillary Clinton, according to court records.

Archived: Keith Raniere and Allison Mack examine human development and gender roles, and how those factor into the quest for personal growth.   <<< This reads like a playbook for Hillary’s speaking tour!

The FBI have raided the home of Clinton Global initiative member Nancy Salzman for helping to run a child sex ring in New York.